Brooks Run Happy is Back!

Hey hey hey, Brooks Run Happy is back! This time with a twist. The race will include obstacle courses and uphill grinds incorporated in a nature inspired route. With a mix of on and off road terrain and the scenic view of Tanay Rizal, this race is expected to be one epic event! 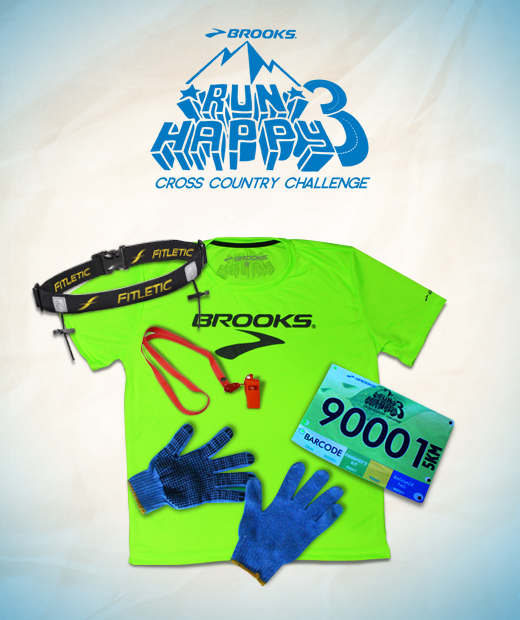 Take advantage of this 5+1 Promo too…

Medals and Prizes
Finisher’s Medal will be given to 16k and 24k runners.

Good Job:
– very attractive and high quality singlet (I vote for the Brooks singlet as the Best Singlet of the Year—so far!)
– good number of participants
– ample water (although this could’ve been colder)
– directional signs for 15k
– post-race booths and activities
– unique medal

Needs Improvement:
– clueless race staff upon redemption of race kit (they didn’t know gun start nor assembly area)
– late gun start. 5:30AM for 15k is late considering the heat. Even worse, race started 15 minutes late at 5:45AM
– no kilometer markers
– no sports drinks
– no ice nor sponges
– lack of marshals
– no mats nor ribbons in the race course. How did organizer ensure that there were no cheaters?

Brooks Run Happy was a relatively small race with 4,000 runners braving the intense heat of the summer sun at Bonifacio Global City. The bright yellow Brooks race singlet brightened up the road and stood out as the best feature of the race. Basic amenities for a race were provided such as water, directional signs, and road closure, but this was not enough for a summer race where organizers should go the extra mile to ensure runners’ safety and comfort. Gun start was a late 5:30AM and, worse, it failed to start on time. On the route, there were no kilometers markers, an obvious lack of marshals to supervise runners, and quite curiously no mats nor ribbons at any point in the course to monitor potential cheaters. In a race under such harsh conditions, the tepid water at hydration stations helped little to cool down runners when ice cold water, sports drinks, sponges or ice could’ve been provided. We hope that next year, Brooks will stage a much “happier” run.

I had to do 32K today in preparation for Phuket Marathon on June 12. I must’ve told more than a handful of runner friends the past week that I was running my longest run over the weekend. So, you could’ve imagined my shock when Lit, my running buddy and sort-of-coach who has my Phuket Marathon Training Program locked up in his brain, informed me that: No, this was not my longest run because I had to run more next week; 35K to be exact.

Okay, one at a time. I focused on 32K this morning.

Jun, Lit, Ton, and I agreed to meet at 4:15AM in Bonifacio High Street to cover some distance before dawn and before Brooks Run Happy 15K which we all signed up for.  We ran happily throughout Bonifacio Global City along with some easy chit chat to cover almost 7k. Then, we headed for the race.

We stood there in the assembly area drenched in sweat while all the other runners looked clean and fresh in their yellow singlets. When you have to do 32k in this hot weather, every early morning minute counts so you can get the mileage in before it gets excruciatingly hot. When over 10 minutes had passed after the announced gun start, we decided to squeeze some kilometers in and run around the area while waiting. We got 700m in then the race finally started.  Thank God!

The four of us ran side-by-side in the first few kilometers. Lit and Ton agreed early on to practice the Galloway Run-Walk method of 9 min run and 1 min walk. Jun and I first agreed to run at 5:45 min pace, then after a few seconds before heading out to Buendia, I asked Jun: If we go at this pace, don’t you think we might not have anything left to cover the 10k distance after the race. He nodded. And, with that, we slowed to a stop and decided to pace with Ton and Lit. All for one and one for all!

After Buendia Flyover, we found shelter under the shade of the buildings on that road. So, ruining our chances of hitting a PR (as if!), we ran loops along the flat and shaded roads there. Pretty soon, we found ourselves at the end of the 15k runners line. We even spotted Toby Claudio acting as sweeper for the race.  Talk about hands on!

We made a lot of stopovers along the course to wash up, rest, replenish our water bottles, and go on bathroom breaks. We also took detours at our favorite Starbucks branches where they generously provided us with ice.

We crossed the finish line and we didn’t even stop. We went on to run around Bonifacio Global City, straight to the parking lot to our cars where there were ice cold towels, chilled Gatorade, bananas, raisins, and gels waiting for us.

POST RACE: LAST 10K
The sun was beating down on us and it was a mental struggle to plod on forward.  By this time, Ton was off to breakfast, so we were down to three.  Good thing that Jun, Lit, and I find humor in our pain and over all the crazy things we put ourselves through for running.  So, while we were hoping that all the struggling would be over ASAP, we also enjoyed every minute of our long run together. – Bumped into the Caliraya Runners in the last few meters of our 30k run. Nice meeting you all! Photo courtesy of Timo –

We ran towards any shaded area of BGC. And, we ran those areas over and over and over again. Sadly, around during the last 5k, I started feeling knee pain. I was compelled to alternate between running and walking and stop to stretch a lot. I knew that the right thing to do was to quit and rest it so I wouldn’t aggravate the problem. The boys were kind enough to agree to stop at 30K. We were happy with this. After all, we still have 35K next week! Registration Sites: (Registrations start APRIL 19 except for RUNNR which is on-going)