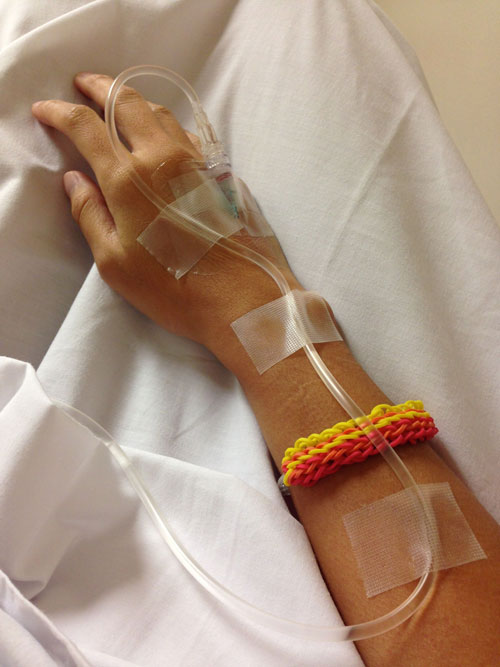 As I rolled out of bed, I knew something was wrong. The room was spinning around me. I slowly made my way towards the bathroom swaying from side to side like a drunken person (which is just the same as me having only 3 sips of wine!) After I splashed water on my face, the dizzy spells disappeared and, being the naive and somewhat cuckoo runner that I am, I proceeded to prepare for the race by preparing a light pre-race breakfast of coffee, apples, and peanut butter.

I happily ate while vegged out on our sofa watching TV. As I was about to get ready for the run, I stood up from the sofa and immediately felt like I was on a roller coaster again. Woah boy, this was bad. Reality sunk in. It wasn’t safe for me to run, much less race!

I forced myself back into bed and woke up a few hours after to ask the hubby to take me to the Emergency Room of Asian Hospital.

My blood pressure and temperature were taken. A blood test was ordered as well. I was confined at the ER room for over two hours. By this time, I was given medicine for the dizziness and I was comfortably listening to my audiobook of Spirit Junkie by Gabrielle Bernstein as I prayed that this was nothing serious.

The doctor returned with the results. She said that everything was normal except for my potassium which was low. I had “hypokalemia.” I was also mildly dehydrated.

The doctors ordered me to eat more potassium-rich foods such as bananas and to drink more fluids. I nodded my head like an obedient student. Then, she added: “No vigorous activity for one week.” to which I yelled dramatically “Nooooo!” She obliged quite hesitatingly, “Okay, three days.” I almost punched my fist into the air in triumph only I didn’t have much energy.

I’m on Day 4 and, guess what, I can’t run a kilometer even if I wanted to.  The past few days, the dizziness disappeared thanks to the meds prescribed, but I’ve been dealing with migraines (I think due to bad eyesight. Waah!)  My eyebrows have gotten stuck together, not due to hypokalemia, but because I’m angry, bored, and frustrated.  I can’t remember missing workouts for this long in years!  Boooo!

Since I’ve spent the past few days mostly in bed (I’ve escaped a couple of times to attend meetings LOL), I had enough time to deduce exactly what happened to me. Now, take this with a grain of salt because I’m no doctor, but I do know my body the best. I’m writing this so you can learn from my stupidity and make sure you don’t do the same if you want to avoid any mishaps. Here’s what I learned:

1. Take your poop seriously. I had wet stool for the past 3 weeks on and off (TMI forgive me) and, since I felt fine, I went about my workouts and hydration plan as I normally did. I was training full blast (sometimes with double workouts in a day) and drinking the same amount of water and Gatorade as I always have. I do think this was why I was dehydrated. It wasn’t that I wasn’t getting enough fluids in, it was that a lot more was getting out!

2. Eat well.  From my research online, they say that hypokalemia is rarely ever caused by diet.  Meaning, it isn’t because I didn’t eat enough potassium-rich foods (e.g., bananas, salmon, spinach, etc. which are truly my favourite foods which are often in my diet) but it’s usually caused by the potassium getting out of your system (probably due to my point in Number 1).  Still, as athletes, we should see food as our fuel.  We need to fill our tanks with clean, healthy food that can get our bodies moving the way we want it to.  I eat clean most of the time, but, I must admit, I’m still a work in progress.

3. Reduce caffeine.  This hurt me as I typed this.  I am IN LOVE with my coffee.  I have three cups a day even if I know that coffee is a diuretic.  The mild dehydration gave me a scare and I realized that my beloved coffee may be doing me more harm than good.   For athletes, too much coffee coupled with tough workouts under this heat can lead to dehydration.  I’m not cutting it out entirely, but I am just limiting coffee now to one cup a day.  Ouch.

4. Hydrate.  I drink one bottle of Gatorade for workouts that last over an hour.  It’s always been one bottle weather the temperature is cool or warm, rainy or humid.  Only now did I realize that I should’ve increased my hydration with the intense heat lately.

5.  Rest when your body tells you to.  I don’t know how many times I’ve heard people say: “Your body is telling you to rest.”  I’ve been training 6x a week, organizing a race, caring for kids who just started school, relaunched my website, and working on a new secret project and yet, when I hear those words it usually enters one ear and goes out the other.  Well, now, due to bed rest, those words finally had time to sink in.  Fine, fine, these well meaning people are probably right.  I’m guessing my body wants to rest for just a couple more days though.  I predict I can run again by Sunday. tsk tsk.