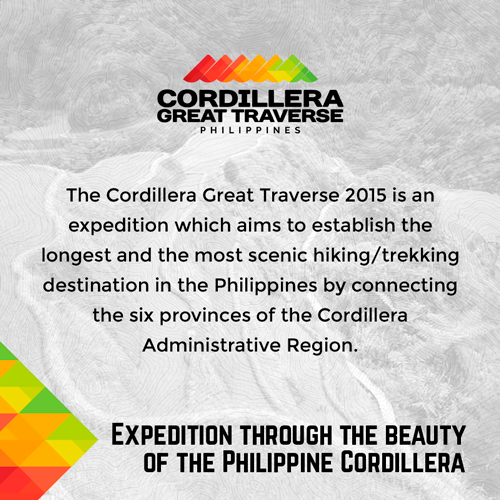 The Cordillera Great Traverse shall start from Sagada (Mountain Province), passing through Abra, Kalinga, Apayao, Ifugao, Benguet and finally to Baguio City, around 400 kilometers in distance with xxx thousand meters of elevation gain and loss through the mountain passes, forests, rivers, waterfalls, rice terraces, villages and ancient trails. It shall pass through and highlight scenic route and major tourist attractions and will present hikers/trekkers, both local and foreign, the natural beauty of the Cordillera mountains rivaling some of the best trekking destinations in the world like the Appalachian Trail (3,500km, USA), the Great North Walk (250km, Australia), Drakensberg (220km, South Africa) and GR20 (180km Europe).

HOW DID IT START?

The idea started with one Facebook post inquiring whether there were connecting trails or natural pathways for the 6 provinces of the Cordillera Administrative Region as the ultimate venue for the longest trail expedition in the Philippines. This would showcase the diverse natural beauty, cultural heritage and cool climate of the region.

The idea, both being novel and challenging, stoked the interest of almost everyone especially those who are nature lovers and have solid athletic background.

After several exchanges online, the CGT 2015 Team was formed and the first team meeting was held on June 7, 2014.

WHO ARE THE TEAM MEMBERS?

As of today, we are a strong team of 43 members. The CGT Team is currently on its planning stage spearheaded by its team members, contributing not just their solid athletic background but also their talent and skills as professionals in order to move the expedition forward. (Click HERE to download individual profile of CGT 2015 team.)

The CGT 2015 is in the process of securing appropriate registration with the government agencies and regulatory board. We shall partner with NGOs, environmentalists, government agencies, the local communities and volunteers to achieve our goals.

WHAT IS THE CORDILLERA ADMINISTRATIVE REGION (CAR)?

But more than that, it has much more to offer.

The region is a home of a varied set of cultures from Benguet’s Kankanaey, the Ifugao and Kalinga and the Isneg in Apayao. The ethnic groups are distinct having kept the mountains their home for centuries. Each of the seven major ethno-linguistic groups has its own family of languages and cultures.

Cordillerans view land as the source of life, an integral part of their cultural identity that traces its origins from the land.

In terms of natural resources, it is the richest region in the Philippines. 11% of the total area is agricultural rice fields, orchards, pig farms and pasture lands. 60% of the country’s temperate vegetables are produced in the area. It is the country’s premier mining district. CAR provides ecosystem services to a large portion of Northern Luzon. It supplies most of Northern Luzon’s irrigation needs. The headwaters of many of Luzon’s major river systems originates in these mountains and serves as irrigation for the plains that surround the Cordillera Mountain range; Chico River, Agno River, Abra River, Siffu River, Amburayan-Naguilian-Aringgay River System, Ahin River, Abulog-Apayao River system.

The region is a home to the Banaue rice terraces, a UNESCO World Heritage Site and the famous hanging coffin and limestone caves of Sagada. Kalinga is known for the Chico River, the longest river that spans 174 kilometers. The mountain trails runs through farm fields, rolling hills, picturesque vegetable and fruit farms, gorgeous greenery and aquatic medley of streams and rivers.

WHAT IS YOUR GOAL?

CONNECT THE TRAILS. The traverse shall allow the team to establish the longest and most scenic trekking/hiking trail destination in the Philippines. This shall be done through research, mapping, immersion with the locals, and actual reconciliation of the trails of each province.

EXPLORE. The traverse shall allow the team to learn the culture of each of the ethnic groups who’ve held the mountains as their home for centuries. The locals shall act as our guide to establish the trails and lead us to discover more about the region.

PROTECT. The traverse shall be our means to mutually exchange knowledge with the locals on how to protect the mountains. As we map the trails during the traverse, we shall aim to be the advocates of protection of the Cordillera Mountains and its beauty.

The journey through the beauty of Cordillera has started. We shall connect, explore and protect. 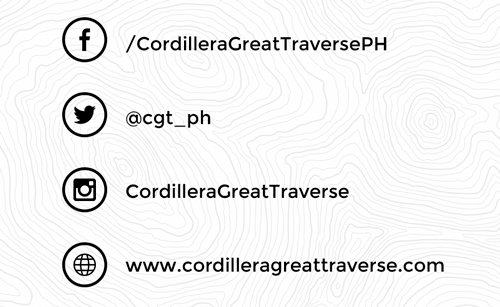