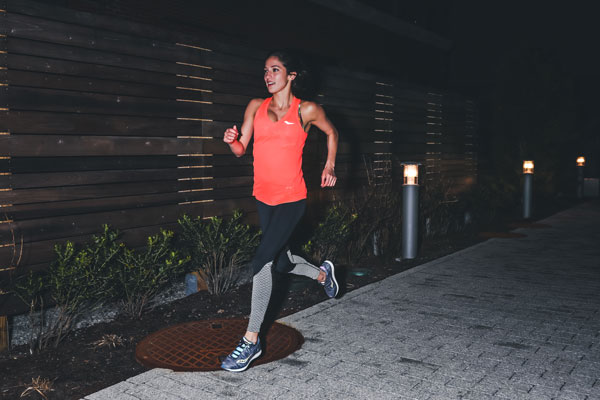 Running at night can be quite fun without the intense heat of the sun or the need to rush to work right after the workout.  But, night running can come with its challenges.  Here are some tips to make sure you’re safe during the run:

1- Run on the opposite lane. Well, this is a rule even for the daytime but it’s more important, of course, at night when cars may not see you on the road. Run always towards the cars and not along with them. END_OF_DOCUMENT_TOKEN_TO_BE_REPLACED

“One of the primary objectives in the development of EVERUN™ was to deliver a continuous cushioning experience to runners, combining smoother landings in the heel with reduced pressure in the forefoot.” said Patrick O’Malley, senior vice president of global product for Saucony.

EVERUN has a new Topsole™, a breakthrough construction process that positions the cushioning material closer to the foot, which delivers the same plush feel from the start of a run until the end. END_OF_DOCUMENT_TOKEN_TO_BE_REPLACED

I’ve been running with the Saucony Guide 6 for months now. I’ve been using it as my primary training shoe for long distances on weekends and it was my shoe of choice for Tokyo Marathon last February.

When I heard that the Saucony Guide 7 was about to be released I was both worried and excited. I looked forward to testing this fantastic pair of shoes and, at the same time, I hoped that Saucony didn’t make too many changes to an already great shoe.

The good news: they made only a few changes, which are truly upgrades and improvements to its predecessor! That’s a good thing because this is a multi awarded shoe. Since its original debut in 2008, the Guide was twice named the Independent Running Retailers Association (IRRA) “Shoe of the Year” (2009, 2010), Runner’s World “Editor’s Choice (2012) and Runner’s World “International Shoe of the Year” (2012).

So, I’ve used the Saucony Guide 7 for over a month now and I can finally release an honest to goodness shoe review:

The Saucony Guide 7 is a stability shoe that provides flexibility, guidance, and support surprisingly without the bulk or the weight. The best way for me to describe it is that it’s a cross between the stability of an Asics Gel Kayano and the lightness of the Kswiss Kwicky Blade Light. Basically, the Saucony Guide 7 has successfully combined the best of both worlds.

The shoe is extremely stable and I like how it feels close to the ground since I’m an overpronator. It provides good cushioning, not the soft mushy type, but just the right amount to still be responsive. I also like how flexible the shoe is which I can tell by the sound of the shoe striking the ground. I’ve had shoes that sound like plywood hitting the pavement. The Guide 7 is close to silent and soft.

The forefoot area is wide and spacious, perfect for runners like me with annoying bunions. The heel cup hugs my foot comfortably. It doesn’t slide nor does it feel too tight.

To be honest with you, I didn’t feel a significant difference from the Guide 6 to 7 and that’s a good thing!

Nothing. This is the first time I absolutely have no complaints about the shoe.

So who can run in the Guide 7? The answer is: almost anyone.

Pronators appreciate the light stability and guidance, while neutral runners find that it offers a touch of support without over-correcting their foot through the gait cycle. It really hits a sweet spot for a large percentage of the running population. Its fully decoupled SRC (Super Rebound Compound) crash pad in the Guide 7 heel area provides a smoother transition at foot strike. Moreover, the outsole of the new Guide’s forefoot has been flared by 2mm for a more supportive platform during the latter stages of the gait cycle. The Guide’s 8mm heel-to-toe offset positions the foot during impact in a way that creates a greater range of motion for the Gastrocnemius-Soleus-Achilles tendon system, allowing for a more powerful running stride. The end result: the Guide is the ultimate training partner, providing both stability and flexibility in a surprisingly lightweight package.

UPGRADES FROM SAUCONY GUIDE 6 TO 7

Saucony has upped the Guide 7’s midsole technology game by adding a heel-to-toe PowerGrid insert for lightweight propulsion. The revolutionary PowerGrid foam is 15% lighter and 30% more durable than traditional EVA. Deeper flex grooves and improved toe-spring ensure the new Guide moves with the runner. At a mere 10 oz, the Guide 7 is significantly lighter than any other shoe in its class.