After months of waiting, Garmin announced the fenix 5 is now available in the country!  Garmin is now accepting pre-orders for Garmin fenix 5S and fenix 5X.   Waaah, I can’t contain my excitement.

The Garmin fenix 5 series are three watches designed with adventurers of all sizes in mind.   I’m a huge fan of the Garmin Fenix 3 and, while I don’t want to part with it, I also have the urge to upgrade to Fenix 5 already (if I only knew which one among the three to get!)

With the new fenix 5 lineup, users now have a watch that compliments their style and adventures. Wanna know more about each of the Garmin Fenix 5 models? Read on… END_OF_DOCUMENT_TOKEN_TO_BE_REPLACED

It’s been a month since TBR Sun Life Dream Marathon 2017, but we will never forget your first 🙂

adidas Running revealed the latest version of its iconic UltraBOOST shoe, the new UltraBOOST X, tailored to the unique shape of the female foot. What a beauty!

END_OF_DOCUMENT_TOKEN_TO_BE_REPLACED

Dance and Sweat with your Buddy on March 21

Dance and tone the night away with your best bud in our GoWell Community Workout!

You’re in for a fit and fun night! END_OF_DOCUMENT_TOKEN_TO_BE_REPLACED 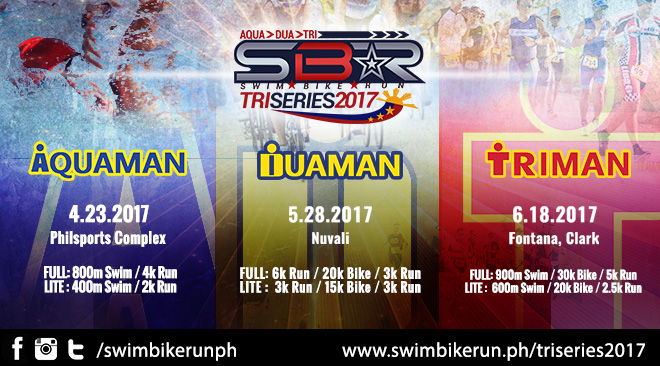 Whenever I hear from good friend Carlos de Guzman of SBR.ph I get tempted to jump right back into tri!  Carlos told me that the SBR.ph Tri Series is back and it’s bigger than ever.  For the 2017 edition, they’re introducing the LITE category for beginners.  How exciting is that for all you runners who are curious to get their feet wet with triathlon?  Perhaps this is a good place to start.

What is the SWIMBIKERUN.ph Tri Series?

The SBR.ph Tri Series is the ONLY multisport race series that is designed and organized for newbies and amateurs. Whether you’re a newbie or a tri veteran na “nagbabalik-loob” and just wants to “enjoy” the sport, the distances of the Tri Series are challenging enough for the experienced athletes, yet still doable for the newbies. Now with the LITE category, the series opens another stepping stone to capture those who are still not yet ready to conquer the SBR.ph Tri Series FULL distances. END_OF_DOCUMENT_TOKEN_TO_BE_REPLACED